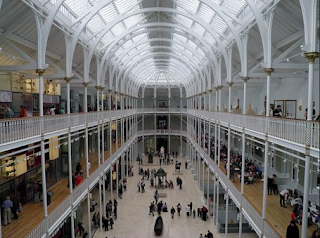 Indigenous leaders want Beothuk tribal remains stored in Edinburgh brought home. The museum has said it will take a 'considered view' if  'the proper approach' is made.

Give back those human remains seems a pretty proper request to make to any institution holding such things...


Chief Nonosbawsut and his wife Demasduit died in Newfoundland in the early 19th century, at a time when the Beothuk tribe was being wiped out by colonial expansion. Scots-Canadian William Cormack took the skull and other goods from the grave of Nonosbawsut - who had been shot dead by British officers in 1819 when asking for the release of his captured partner Demasduit - and sent them to Edinburgh. Demasduit, captured by British troops and renamed ‘Mary March’, died in 1820 - and her remains were also later taken to Edinburgh. [...] All Indigenous groups in Newfoundland and Labrador, Canada, have signed a letter requesting the return of the remains. “[...] Premier Dwight Ball of Newfoundland wrote to the National Museum of Scotland requesting a return of the remains in 2016 - but saw the attempt rejected based, according to the museum, on Scottish legislation. According to CBC in Canada, part of the issue was with identifying "a community descended from the original owners” to make a valid application. However, with the Beothuk people wiped out this is not possible.

This is so wrong:


6.4 Any request for the transfer of human remains should be submitted in writing to the Director. This request should set out the claim clearly and give as much information and supporting evidence as possible. In particular: • Full endorsement from the National Government and recognised National Agency (Museum) would need to be provided. • The community of claimants would need to demonstrate that it is a direct genealogical descendant of the community whose remains are under claim and/or that it continues to share the same culture (spiritual beliefs, cultural practices) attributed to the community whose remains are under claim. It would also need to provide evidence of cultural importance, including cultural and spiritual relevance, to the community making the claim and identify the strength of the connection of the community to the remains, and the consequences of their return. • The community of claimants or representatives acting for this community would be expected to demonstrate that they are fully supported by all the potential claimant groups.

One wonders whether the original acquisition of those remains was accompanied by so much paperwork of the same type. Maybe NMS could show us the requests of the  Beothuk elders and direct descendants to dig up their chief's head and look after the remains of 'Mary March' in their museum and are fully supported buy all the groups. Can they?

The Beothuk are the aboriginal people of the island of Newfoundland. They were Algonkian-speaking hunter-gatherers who probably numbered less than a thousand people at the time of European contact.