Researcher gets Grant for Research into Artefact Repatriation from Europe


University of Birmingham academic gets £1.8 million grant to research into artefacts repatriation from Europe 14 Dec 2020

A researcher from the College of Arts and Law at the University of Birmingham has been awarded an ERC Advanced Grant as part of €655 million (£591 million) funding of the EU’s current research and innovation programme called Horizon 2020. Professor Khadija von Zinnenburg Carroll, who specialises in global histories and contemporary art from the Department of Art History, Curating and Visual Studies secured a grant of €2 million (£1.8 million) to explore 'Artistic Research in Museums and Communities in the process of Repatriation from Europe.' Khadija von Zinnenburg Carroll said: The release in 2018 of the Sarr Savoy Report crystalised the debates that had been moving with increasing urgency in museums and international relations of restitution and repatriation. The REPATRIATES project is important as it will bring together internationally art-based research actions that respond to repatriation, to learn from exchanges between French, German, Austrian and British institutions and stakeholder indigenous communities. REPATRIATES examines how contested objects - whose ownership may remain unclear - can be exhibited sensitively. It develops strategies for making artistic responses to this material, to propose ways forward for the decolonization of cultural property. This research hopefully will aspire to shape a pan-European response to the complex political, historical, legal, and affective dimensions of the repatriation of cultural assets."

Posted by Paul Barford at 8:37 AM No comments:

The Annapoorna, a statue from the University of Regina’s collection that for the last 70 years has been in the MacKenzie Art Gallery there, will soon be repatriated to India (Stolen statue from the University of Regina’s art collection officially repatriated to India  Battlefords News-Optimist Nov 20, 2020).

The statue was part of the original 1936 bequest by Norman MacKenzie, the gallery’s namesake [...] MacKenzie had noticed the statue while on a trip to India in 1913. A stranger had overheard MacKenzie’s desire to have the statue, and stole it for him from its original location – a shrine at stone steps on the riverbank of the Ganges at Varanasi, India.

The statue is of the Hindu goddess Annapoorna, who is the goddess of food and the queen of the city of Varanasi. She holds a bowl of kheer (rice pudding) in one hand and a spoon in the other.
When the current administration at the University and the MacKenzie Art Gallery were alerted to the documentation which revealed the statue as an object of culture theft, both institutions committed to take taking appropriate action.
Posted by Paul Barford at 10:06 PM No comments:

This month, France and the Netherlands took significant steps toward the restitution of looted colonial artifacts. In the Netherlands, the Dutch minister of culture promised policy changes in response to an official report recommending the restitution of stolen cultural property to former Dutch colonies. And in France, two years after a government-commissioned report called for sweeping restitution, the French legislature unanimously passed a landmark bill that would allow for the return of 27 important looted artifacts to Benin and Senegal. In 2017, French President Emmanuel Macron publicly promised that the country would return all looted artifacts to sub-Saharan Africa within five years. Macron’s pledge, and the 252-page restitution report that followed, were at odds with French laws and attitudes regarding the inalienability of the country’s cultural property.[...] The bill, which the French government fast-tracked in July, was unanimously approved by the National Assembly on October 6 and then by the Senate on November 4. The new law will enable the permanent return of the sword to Senegal. It will also allow for the permanent return of 26 of the Benin Bronzes, important royal artifacts that were looted from the Abomey Palace in modern-day Benin in the 19th century. The select 27 objects will be restituted within one year. The Senate additionally advocated for the formation of a national council dedicated to future restitution cases.

In the Netherlands, one day after the draft law passed through the French National Assembly, a special advisory committee on the national policy framework for colonial collections released a report commissioned by Dutch culture minister Ingrid van Engelshoven that has advised that the Netherlands recognize the injustices of owning stolen artifacts and unconditionally return “any cultural objects looted in former Dutch colonies if the source country so requests.”
Posted by Paul Barford at 1:27 AM No comments:

Minister of Culture, Gender, Entertainment and Sport, Hon. Olivia Grange, said that “as Minister, I am determined to ensure the repatriation of cultural objects taken from Jamaica, which constitute our rich cultural heritage,” [...] Minister Grange said the return of the artefacts “will fill the gaps in our history that are critical to the process of understanding ourselves and fostering greater cultural awareness”. [...] She noted that in 1981, the British High Commission in Jamaica had identified approximately 137 objects from Jamaica that were housed at the British Museum.[...] the Taino sculptures were removed from a cave in Carpenter’s Mountain in the parish of Vere, now known as Manchester, during the 18th century. Those objects are also called Carpenter’s Mountain carvings. “The objects are slated to have been acquired by the British Museum in the period between 1799 and 1803. They were formally entered into the Museum’s collection in 1977,” the document says further.[...] Hopefully some kind of arrangement can be worked out between the Jamaica National Museum and the British Museum over the future of these historically important objects. Perhaps a time-share arrangement by which the originals and replicas are swapped back and forth would allow for the artefacts to be viewed and studied by the largest number of people on both sides of the Atlantic.

Posted by Paul Barford at 1:21 AM No comments:

British Museum's Stuff "All Bought and Paid For" Director 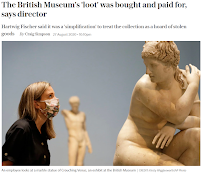 Mr Fischer has argued that many significant pieces in the museum were acquired by less controversial means, including purchases, donations and treasure finds. These items cannot simply be sent back to their country of origin, the director said, and the legitimate acquisition of objects had to be taken into account. [...] the museum has worked to address its colonial legacy, and the issue of possessing cultural artefacts taken during the pomp [sic] of empire. [...] When asked why treasures cannot simply be handed back, Mr Fischer referenced the complex histories of many of the displays. Items from the Sutton Hoo hoard were gifted by Edith Pretty, the landowner of the site where the famous ship burial was found, and pieces like the Bronze Age Ringlemere cup were given to the museum after being legally declared as treasure finds.

See the text by Kwame Opoku: "Did British Museum Buy Most Of Its Thirteen Million Artefacts?" in Modern Ghana who analyses Mr Fischer's apologism.

It is depressing to realize that those who often preach the rule of law and human rights seem not to care much for the human rights of others to an independent cultural development and the right to determine freely the location and use of their artefacts. If the British Museum wants to discard its reputation as a citadel of looted and stolen artefacts of others, it should stop trying to advance baseless arguments and justifications for its illegitimate and unjustifiable detention of artefacts of others. [...] A large portion of the 13 million artefacts in the British Museum were clearly acquired under colonial rule with all the force at the disposal of the defunct violent British Empire.

Also, in the relationship to the debate on "who owns?", note the issues that it runs the Portable Antiquities Scheme handling finds for the most part dug and brought in by artefact hunters. Has legal title of the many individual objects the PAS handles been cleared with the owners of the property they were taken from? Or do PAS not really bother about title assignment and provenance documentation?
.
Posted by Paul Barford at 1:11 AM No comments:

Denver Vigango go back to Africa

Denver Museum of Nature and Science repatriates thirty looted wooden carvings to Mijikenda people in Kenya and northern Tanzania. "We should not be curating people’s souls," said Stephen Nash, the museum’s director of anthropology and curator of archaeology.


The Denver Post reports that the Denver Museum of Nature and Science has repatriated 30 wooden carvings to the Mijikenda people of Kenya and northern Tanzania. The museum received the carvings as a gift in 1991, according to Stephen Nash, the museum’s director of anthropology and senior curator of archaeology, but are now thought to have been looted. The long, rectangular carvings with round heads, known as vigango, memorialize members of the community who have died and are thought to embody their spirits. “Once we realized that we were curating the physical embodiment of 30 dead people’s souls, that’s when we said ‘Look, the Mijikenda never had a chance for informed consent like you and I enjoy when disposing of our loved ones. We should not be curating people’s souls,” Nash said. The original site where the vigango stood is not known.

Actor Gene Hackman donated the 30 vigango to the Denver museum in 1991, Nash said. When the museum contacted his representatives, they said they had no record of the transaction. Nash and Chip Colwell, the museums’ former curator of anthropology, believe a late art dealer whose clients included Hollywood actors and producers ended up with most of the vigango. The people who looted the grave sites likely got paltry sums while the traders who sold them got thousands of dollars and buyers got tax write-offs for donating them, Nash said.

Posted by Paul Barford at 9:49 PM No comments:

Display It Like You Stole It – Museums and Ethics 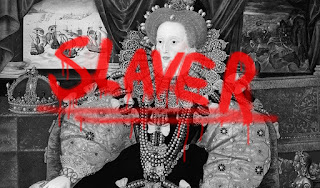 ** This event will be held ONLINE. Please register using the “Book Now” link. **
** Conway Hall is a charity and we politely ask you to add a donation of at least £5 when registering. **

In a country that’s repeatedly failed to come to terms with its colonial past, led by politicians who seem to think the past is the future, Alice Procter seeks to resist triumphalist nostalgia with art history. How did the narratives of Empire come into being? Who controls them? And how can we learn to see through the whitewash to the truth?

“Display it like you stole it” is a call for museums to rethink the politics of display in their galleries. From label text to lighting, how is ownership created and dissent shut down? Who is the authorial voice here, and what is considered worthy of inclusion? It’s well past time for museums to be honest about their acquisitions history and how objects arrive in their collections in the first place.